Updating dysregulating memories, an experiment part 1.
By an Anonymous Friend
My therapist and I have been working on updating some of my memories. The concept is simple by discussing certain memories as an adult I can re-label them with an updated adult perspective, discharging some of the emotional impact they have. This should hopefully mean that I am then able to process some of my triggers more calmly.

Triggers that currently when sparked off can whirl me back to the past and to the age / feeling of a situation, often accompanied by some 'interesting’ unwanted  present day behaviours. The process is also helping those parts of me (stuck at that age) to have, for the first time, their own voice. It also gives a first chance for them to speak and be heard in a safe place.

Before I write any examples down there is just one thing that must be made clear. I am only giving you my bias of the situations and no one in my family has ever purposefully been vindictive or malicious. Each member of my family has their own tail to tell; this is me giving mine. I understand that my actions and behaviours gave those around me a real problem, but I think now the reasons for the behaviour would be better understood.

In fact my family were, at the times I am writing about, very giving and were trying to love all those around them. They were brethren missionaries. It must also be acknowledged  that some of  these same strict / rigid  beliefs were also the ones that made me and my family  fall short. I often looked embarrassingly spoilt and ungrateful in the face of the hunger and need surrounding us. It made my need look ridiculous and arrogant.

We were once in someone's garden and I had been in the pool (we were living in Africa at the time). Suddenly I saw a small spider land on my mum's flowery dress. I knew spiders were dangerous where we lived. I rushed over all sopping wet and slapped the offending creature off my mum's sleeve. Dads response to this was to grab my arm in front of everyone (about 15 elders and their wives) and wallop my behind. As a young child this humiliated me incredibly and I then had to live with the story:

"Do you remember that time she just rushed out the pool and hit her mother!"
"If that were my child I would show her some real discipline”
“they let her get away with far to much ".

My mum used to love cooking everything in a pressure cooker. (Our chickens were tough as old boots). Unfortunately this meant that as I saw the pot go on the stove I would panic, dreading the intense hissing sound that the weight would make as the pot came up to pressure. I would then brace myself for the even louder chronically high pitched screeching that the pot made as it was placed  in the sink and the weight took off. This evil pot was part of my life from about 3-10yrs old and got me into a lot of bother.

"that child's disappearing  again"
"stop overreacting!"
"why do you always runaway when it's time to eat come and sit here in the kitchen with me now!".
“You need to learn to just get over it”

As I mentioned before part of my young child hood (5-11) was spent in Africa, Zimbabwe.  Every year or so we would take a trip to South Africa so we could renew our visas. These trips were always surrounded by fear. I knew this because I heard a lot of prayers about what could or had happened to others. The trip its self took over eight to ten hours and we had to pass through many army controlled road blocks on the way. Checks and bribes had to be met whilst soldiers would surround the car with a lot of long large guns.

There was the real threat of kidnap and being held for ransom and the car being stolen by opposing political parties or rebels. During the last few hours on the road before no mans land and the boarder of South Africa hostility was notorious. So much so that my dad would speed as fast as he could on the bumpy pot holed tarmac. The atmosphere in the vehicle would grow intensity this last hour or so. It did not matter what was in the road; a dead animal, a crashed car or a person. There was only one rule the car must have - NOT STOP!!

Next came a boiling hot wait in the car. It's windows up and doors locked shut and we would join  a queue of vehicles creeping closer and closer to yet more soldiers and guns at the exit gate.

My behaviour before after and during these trips was apparently:

“extremely unhelpful, rude and ungrateful”.
"why can't you just sit still like yours sisters"
"stop starting fights or I'll stop the car and leave you in the road”
" not one more word out of you young lady or your father will smack you when we stop!!"
"sit there and don't move!"
"If you don't stop crying I'll give you some thing to cry about".

Try as I might I couldn't contain myself or calm down. (I was different to my sisters but that's not what this blog is about). By the time I was 8 I had at least  managed to stop wetting myself on a daily basis but my mum had had enough; nothing she nor my dad did could control me.

Daily life For me was a battleground:

"don't give it to her she has butterfingers"
"when is that girl going to learn to run in a straight line?"
" why can't she just sit still!"
"I just washed that, I should make you wear a bib!".
"Your spoon goes in your mouth not down your front!".

Gradually my belief that I was a different, horrid and ungrateful  person grew.  As my sisters became more delicate and girly, I became ever feral, restless, angry and withdrawn from people. Mum kept taking me for hearing tests as she was convinced I was deaf. I had to wear an eye patch for my double vision (which being in Africa my mum made out of some old curtain material and elastic) and it was yuck yuck yuck way to itchy.  My left ear developed banging internally and without rhythm. It would drive me mad and the world could never be silent. The plugging of my ears with oil and cotton wool over and over again did not help and only further irritated me as it kept running down my neck. In the end I was told I would have to:  “learn to live with it”.

My behaviour became more exaggerated and  I would throw myself at anything that challenged me in a fit of blind uncoordinated energy:
After these ( and various other events ) my very unhuggable, feral and angry self ended up being put in a boarding school.  My 6th school and third country, now aged 9... 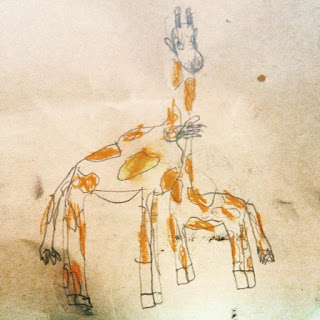