With a gentleness of tone she explained to me:

'It's just that I hate every single thing about you'.

There was no aggression just a sincerity and almost compassion as she tried to get me to understand something that I clearly could quite grasp. I'd asked her, out of curiosity, why she'd spent the previous twenty four hours calling me names that she new would hurt. This had been her reply.

Writing here now I can't even remember what started it, a thing happened, the usual sort of thing, and I said something then it all unraveled. The silence, interspersed with looks of distain and words of harm had trickled on. In the car, at the meal table, bed time, breakfast lunch all simmering. All focused on me, just me.

So, I asked and she helpfully explained that she hated me.

I held fast, I knew that she'd come back with the sincere and heartfelt sorry. I daydreamed about playing it cool or throwing it back in her face or some such grand gesture so profound that it would change her, make her think and alter her behaviour for ever.

A day later the good MrsC texted me from home saying the school had called and she was ill and back at home now. She was proper poorly with the flue that been working its way through the massive.

When I got home she was poorly, still cross. I have to admire her tenacity, if this could be harnessed for good she'd be unstoppable.

She was ill. Sleeping not eating or moving. Wanderings through the night, medicine, the usual business. 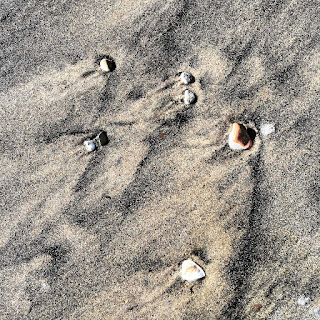 So, the last day. I sat next to her on her sick bed, she did not recoil. I took a chance and stroked her face.

She let me and her hate had passed.