A Review: Billy Bramble and the great big cook off

I managed to persuade my mum to buy ‘Billy Bramble and the great big cook off” for my youngest daughter Sophie’s birthday. If we’d bought it, she’d have no doubt turned her nose up. She’s ten. If we like something, that’s evidence enough that it’s rubbish and totally not cool.

I didn’t actually know she’d started reading it until we had a little bike-riding incident with her older sister a couple of weeks later. Katie is 11 and, like Billy Bramble, likes riding her bike with no hands. I, on the other hand, like her to ride her bike with both hands. We got home from the bike ride, after the incident. Youngest ran upstairs and came back down with the book. She showed me a picture of Billy doing exactly what Katie had been doing. Thankfully, Katie saw the funny side. A couple of nights later, I started reading it to both girls at bedtime. 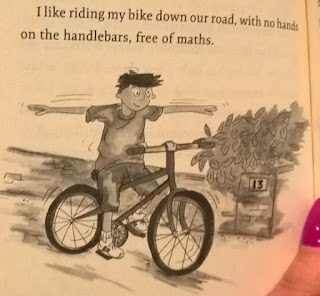 First off, I’ll start by saying that we couldn’t put the book down; to the point that some nights I had to hide the book so nobody took a peek before the next bedtime. I’d say this story is great for boys and girls aged from about 6 right through to middle secondary school years although obviously some might need an adult to read along with them. Written by an adoptive parent, it’s no surprise that the book is well suited to children who’ve experienced developmental trauma and struggle with things like managing relationships, emotions and impulses. There’s no mention of adoption in the story, so the book is equally suited to non-adopted children with similar struggles.

Before I get on to talking about the characters and story, I just wanted to say that we loved the addition of jokes, lists and recipes slotted in between very short sections of story. It makes it an incredibly easy read for the reluctant reader. We’ve got plans to make our own custard creams when we have a free weekend.

The girls loved reading about a family like ours, a family we could identify with. The three of us saw ourselves, each other, and our lives mirrored in the pages of the book. For a family that often feels ‘different’, it was comforting, and the cause of much conversation and laughter.

My eldest, Katie, is just like Billy Bramble (even more now that she’s started calling herself Katie Bramble and eating custard creams three at a time). She loved reading about a character she could identify with. To say too much would ruin it for others, so I won’t. She’s asked for her own copy of the book for her birthday, even though we’ve read it. It made her feel good.

Billy’s sister Lucy isn’t mentioned much in the book but there was just enough for us to acknowledge very similar personality traits to my youngest, Sophie. In one way, it’s a shame there isn’t more about Lucy in the book. But in another, it was probably good for us that there wasn’t. Sophie just about managed to cope with the bits about Lucy without slipping into shame, and that was with a lot of careful handling.

I’d like to think I’m quite like the mum in the story. She’s not perfect. Mum tries to be therapeutic most of the time but just once in a while says and does the wrong thing and joins in the craziness. She also cries and shouts once in a while, which I was particularly grateful for. We were able to have some useful conversations about what the kind of mum I’m trying to be, and why I can’t always keep it up.

I could say a lot more but not without giving too much away. You’ll just have to buy the book. We’d give this 10 out of 10. We also think there’s scope for a Billy Bramble sequel. Pretty please.

The girls have written their own reviews: 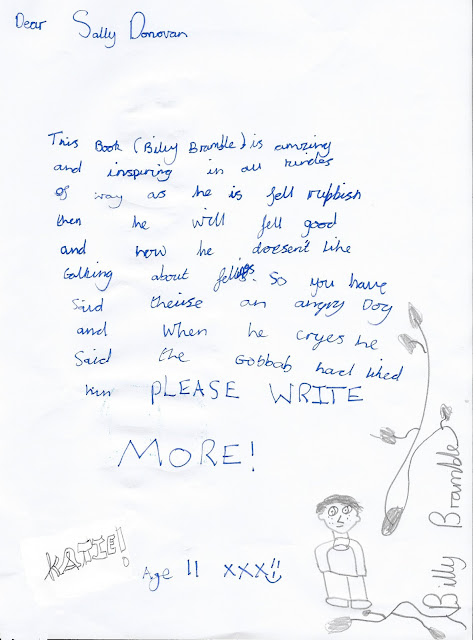 'Dear Sally Donovan. This book (Billy Bramble) is amazing and inspiring in all sorts of ways as he is feeling rubbish and then he will feel good. And he doesn’t like talking about feelings so you have said there’s an angry dog so when he cries he said that Gobber had licked him. PLEASE WRITE MORE. Katie aged 11.' 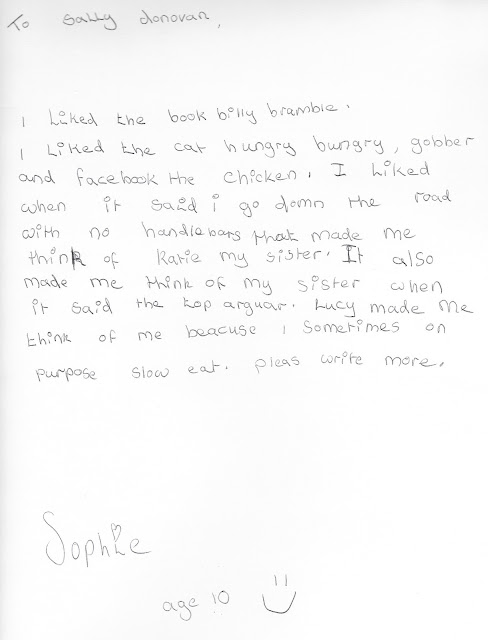