Firstly, this is a blog about a cat. Any metaphorical coincidence is exactly that.

We have a cat that is convinced that I’m a cat killer.
I am not, but it’s over five years since our cat, Kitty, witnessed an incident that convinced her that I killed her best friend Izzy the cat. Once again for the record I did not.

But to be honest my counter transference is starting to twitch and after years of the cat refusing to be in the same room as me I’m starting to lose my empathy. If I walk anywhere near her she will spring from deep sleep to hyper alert in an instant and literally run around the walls until she can get out of the room. You’d think that I was chasing her with a flaming sword while screaming ‘die, die, die wretched feline.’, I do not.

It all started one fateful evening a long time ago. As I entered our garage I was aware of an unusual cat food fishy smell and the tumble dryer making an unusual, whir, thump, whir thump, whir, thump noise. Suspecting little but just a little curious I opened the dryer door. To my infinite sadness I saw Izzy laying still, very still, very dry warm and dead. Carefully, at least as carefully as a man who could care less about cats can, I lifted her out.
At that very moment I paused and looked up to the watching eyes of…………………….Kitty.
For a second I saw the thought flash across her little feline mind, ‘he just killed Izzy, HE kills cats’, then she scarpered. 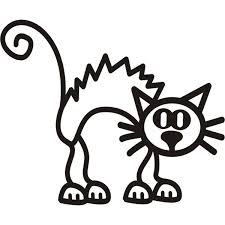 The hows and whys of Izzy's unfortunate end are tragic and no blame shall be proportioned. Though it is noted Mrs C is yet to talk of the unfortunate event without tearing up.

The next morning and after some thought I broke the news to Lotty and Flossy. Lotty especially loved Izzy who would let her push her round in dolls prams. Stepping into über dad mode I wrapped the cat in a towel and sensitively explained what had happened as I showed them Izzy. I thought this would allow them to have 'closure' and make sense of the unfortunate event.
The girls took it well.
After a brief pause Lotty looked me in the eye and asked ‘can we play with her’. Slightly concerned I explained that would not be appropriate. Lotty’s big brown eyes widened ‘pleeeaaase’, increasingly concerned and a little more firmly I explained that she couldn’t.
Lotty’s eyes narrowed as she took a bartering tone, ‘just half an hour’. For clarity I responded ‘NO, stop it, you’re freaking me out!'. She seemed to begrudgingly accept this answer.

Anyway, back to Kitty, in her mind the die was cast and from that day on she has treat me like I am a merciless cat murdering psychopath. At first I had understandable empathy and appreciated that it must have been upsetting for her. However, after over five years of being framed for something I didn’t do and responded to like I did do it I’m starting to change my view on the cat.
She’s wearing me down.

So why bother being nice? It makes no difference.
Why try to be understanding? I will always be perceived as the cat killer. Acts of kindness are undone by the slightest sudden movement that reinforces the fears and threat. Offers of affection are pointless, soothing noises and gestures are rebutted or misinterpreted as sinister ploys.

Anyway, a blog about cats.