Me: Excuse me I was looking for a first phone for my 11 year old.

Sales assistant: Ah, you’ll be after a ‘trainer’ phone.

Me: Yes, ideally I’d like it to be as uncool as possible and with as limited use.

Sales assistant: of course sir, come this way, would you like it in kindergarden blue or vomit green?

So the conversation went on my recent trip to buy a phone.

It’s an oft discussed topic mobile phones and children. There’s a raft of good and helpful advice available and for each potential negative there’s a positive. So, after much thought and a veritable Magna Carta of rules, codes of conduct and terms and conditions set before Flossy we have relented and she got a ‘trainer’ phone for her 11th birthday.

We’ve walked this path before and Sarah got a phone when she was 13 some 10 years ago. Of course it was the source of much strife and the police were very helpful. To be honest I’ve only ever found the police to be very helpful, and dare I say it more empathic than some Social Workers I’ve met.

Though it had been the object of much discussion, debate and dare I say a little tension I agreed and went and bought a phone that texts and calls. No more and no less. It feels like the right time and like any tool has the potential for good and bad so we are going to practice the good and limit the bad with a low tech phone.

Flossy got her phone and initially was a little crestfallen that it wasn’t an iphone 6 plus with unlimited data, hey the kid’s allowed to dream, she was then rather excited.

I felt fine, clear guidelines were issued and sanctions were discussed.
It lives in downstairs, it is not to be abused, Flossy buys calls, any calls to the police (other than genuine) will instigate permanent loss, threatening texts/calls will initiate time limited removal, etc. If all is well then we’ll consider moving up a phone model to something a little less uncool.


I paused as I entered her details, things may never be the same………………… 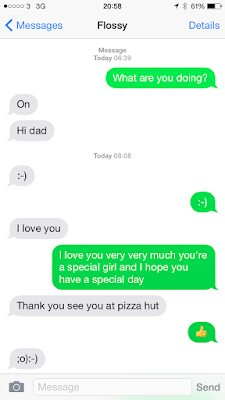