Below is the an article I wrote for Professional Social Work magazine to raise awareness of the challenges faced by many families.

I can vividly recall standing in front of a room of several hundred social workers as they all acknowledged that they had or were supporting families where children’s violent and aggressive behaviour was present. That was unsurprising as it was the topic of the lecture, what was suprising was that when asked how many had been given specific training in relation to supporting children and families with that behaviour fewer than five hands went up in the auditorium. That was three years ago, and like Tess, I’m a social worker and had found myself struggling to manage aggressive and violent behaviour in my children from a young age. Ineffectual but mainly unavailable support had set me on a journey to look closer at the issue in a hope to find the support that my family needed. A chance encounter with academic Dr Wendy Thorley lead to us undertaking research and ultimately the work I do raising awareness and training parents, carers and professionals.

The prevalence of violent and aggressive behaviour in children towards their caregivers and members of their households remains an issue shrouded behind a vale of uncertain professional responses and parental/carer isolation, shame and silence. With reports of prevalence being from up to 65% of children who have been adopted displaying the behaviour at some point in their childhood  to 5% within the general population being a quoted figure.  Within other communities, children with ASD for example, the prevalence is again higher and consequently a true figure is illusive and compounded by the silence and secrecy that frequently covers the issue. Few organisations record incidents or concerns systematically though Northumbria Police’s 2020 Report recorded 515 incidents of violence and aggression over a 10 month period for children as young as 11 years old. Home office advise on Adolescent to Parent Violence and Abuse is available however research in the 2018 Child to Parent Violence and Aggression Survey indicated that frequently families were struggling long before in silence until they could no longer absorb or manage behaviour coinciding with the children moving into adolescence. We do know that this behaviour is often contained within families until children grow bigger and the risks and impact of behaviour becomes higher. Frequently a ‘angry and frustrated teenager’ narrative hijacks the issue, however looking closer there are more complex narratives outside of usual challenges or developmental norms.

The limited research points to the interplay of early and ongoing adversity in children’s lives, complex biology with all of this set within family and education systems that frequently struggle to meet children’s needs or even see that the issue is more than a simple behaviour issue.  As a society we place the job of managing children’s behaviour firmly on parents and caregivers. That’s the paradigm that we operate out of as professionals and when we’re faced with aggressive behaviour that tips into violence our reflex is to look at the parents and caregivers and consider what they are or aren’t doing to precipitate or allow this behaviour. To an extent that is a reasonable response and certainly there is strong evidence to suggest that overly authoritarian parenting or permissive parenting can underly challenging, violent and aggressive behaviour in children. We know that early adversity/trauma and biological difference can mean children’s capacity to operate in within the normal parent/child paradigm can be floored. Responses to trauma, loss, sensory issues and altered perception can all be interpreted as challenging behaviour, it can look very personal and feel very personal. Parent’s responses may be appropriate in normal circumstances but these may not be normal. Parental control is undermined and parents can feel impotent and regress to authoritarian or permissive parenting in an attempt to exert further control or to avoid conflict. As professionals we often walk into complex systems and when we see children not coping or behaving our cultural and societal programming is to look to the parent carer as the cause or the adult setting the tone. However, they may be struggling to respond outside of their siege parenting and easily be identified as the ‘cause’ of the behaviour.

The findings of the 2018 survey raised key areas to take note of, parents and carers were living with children who displayed complex, challenging behaviour not only directed at parents or carers but also other siblings. When asked what services they sought help from it was disheartening to see that many families were initially reluctant to seek help. Unpicking this the stigma of not being able to ‘control’ your children created a dynamic where families felt isolated however this was compounded by fear of what would happen to the children if services were to become involved. Families had frequently sought help from multiple sources, GP, Education, CAMHS, Social care and Police and asking them how they viewed the support they received surprisingly the police were overwhelmingly seen as the most supportive service. It doesn’t take a leap of empathy to understand the levels of desperation that families were in to call the police not knowing if that could lead to criminalisation and separation. Parents and carers continue to love their children despite the behaviour and, as noted, frequently absorb the behaviour to protect their children. 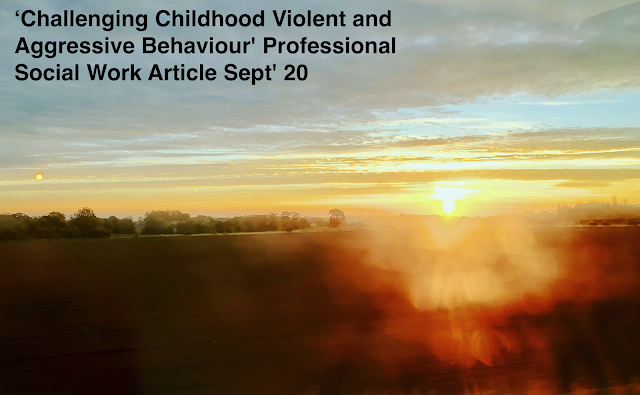 There is hope, though only a few years since asking that group of social workers if they’d received training awareness of the issue and a developing knowledge of the underlying causes has grown. Services like Family Based Solutions in North London find themselves in huge demand. They work directly as partners with children and parents from a solution focused approach to support changes in behaviour and family systems. Non Violent Resistance relatively unknown of five years ago has been taken up by many adoption services and has been seen to help many families. An alternative to historic parenting classes, it is a systemic therapy focused specifically on violent, controlling and aggressive behaviour. It acknowledges that though the blame for children’s behaviour may not lay at the parent’s door the keys to managing that behaviour frequently do and need to and offers principles and intensive support for parents and carers. Though specialist services are growing demand outstrips capacity but foundations of the above, listening, partnership and compassion remain available to all practitioners. Families described feeling ‘not listened to’ and frequently patronised or being sent on generic parenting courses or run the risk of being seen as not engaging with services. Parent and cares are not naïve to the limits on resources or the complexity of the issues but are again and again clear where all practitioners can start ‘Believe us’ and ‘Don’t blame us’.