It seems like good advice to share with myself, I keep saying it over and over again. Out loud, in my head and under my breath.

'Don't get drawn into the chaos'

I keep saying it to MrsC, I like to think it helps her. I won't suggest what she thinks.

The great joy of many adoption blogs appears to be the spectacle of ordinary people wrestle with the extraordinary, be that therapeutic parenting, school shenanigans, olympic level professional diplomacy or some such peculiar situation that us 'normal' folk find ourselves in. The blogs about normal stuff seems so dull. Nobody reads my posts about the nice time we had at the park, where we all played nice then came home, how very dull. We like the grit and the battle, it makes us feel normal. It's all precipitated by these marvellous little people that we willingly fell in love with. They get big you know and the love grows, gets smashed into a thousand shards, stood on and then by some sort of magic reforms then limps along with a grinding determination. 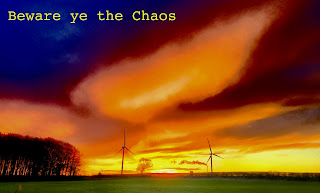 But the chaos, oh the chaos! It is lapping at the shore of my sanity and my toes are getting wet. I keep stepping back, an act of rational common sense from the impending tide, but the tide is coming in and there appears to be naught I can do. I take a deep breath and resolve to not get drawn into the chaos, but some days there appears less places to step back to. Like Canute I've tried to halt the tide by by force of will but that's easy to say, matters of the heart seems to great a fog that befuddles reason and common sense. I've tried ignoring it to no avail.  This chaos pulls on the heart, it pulls you back in. Ankle, knee, waist deep.

Damn, blast and tarnation I'm in it again.

I'd like to go to adoption preparation groups and let it all out. I've seen the look in their eyes, they understand all my words but not when I put them together in that order. The chaos, oh the chaos. Zen and the art of trauma parenting, if I could find my zen I'd write the book Though it may be easier to just get underwear printed with 'don't get drawn into the chaos' on it. Then every day I could pull on my anti chaos pants safe knowing they're close and invisible to the rest of the world.