It's hard to tell what is going on but they are clearly feeling passionate, I lean in and try and interpret the scene. 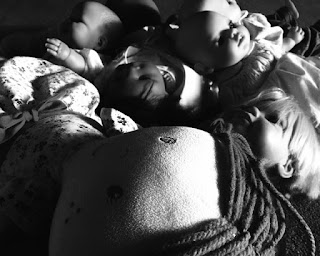 Lotty, 11, is clearly working hard to care for her babies. It's not clear but I think the babies have been naughty, or that's what Peanut, 5,  seems to be saying at full volume. I don't like to criticise but her communication and intervention skills are not all they could be and as for her empathy? Well frankly they don't meet the required standard as set out in the professional capabilities framework for newly qualified let alone experienced practitioners. Peanut continues, if they don't behave you'll have to go away she shouts to Lotty.

It doesn't feel like a sad or happy game, volume in my children's games is no indication of either. It feels like a matter of fact sort of game, it just is.

I heard once that 'I'm down on Social Workers', I don't think I am but I am acutely aware that we're often agents of the state and nobody wants to see us at the front door. Generally, there are no good reasons to see us, even if we're welcome, we're welcome because we're helping in a bad situation or meeting a need that we'd rather wasn't there. We try to be fixers.

The game continues, Lotty's perceived 'non compliance' is testing Peanuts patients and the tone is turning threatening. Lotty, is arguing the toss, quite convincingly, but she needs to be careful Peanut is holding the cards in the game. Social Workers hold all the power.

Children play out what they see, what matters to them and their play can often be a window into their thoughts and feelings. Social Workers have been involved in most of my children's lives they've never played Social Workers until now.

I keep listening to them but I'd rather they weren't playing Social Workers.