With hope in our hearts and porridge in our bellies we set off before dawn. I had been a little distressed the night before as  I'd snapped a spoke and been unable to true the wheel. So it was all a bit wobbly, physically and emotionally.  Zippy was also concerned so I tried to lighten the mood by announcing that my training had consisted of eating pies and thinking about cycling. He was not impressed nor was his concern eased. I’m slightly worried about Zippy.

We went to Parliament Green and I stole some soil to take back, a symbol, and off we set. 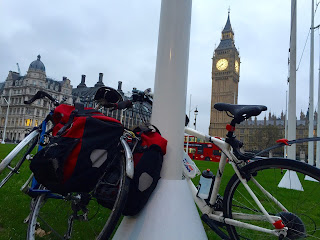 By good fortune we arrived at the door of Condor Cycles at 8am and they kindly had it fixed and had us back on the road by 8:35. They even gave us free energy gels when they heard that we were stupid enough to be attempting to ride to Northumberland.

So onwards. The rest of the day consisted of city, towpath, hills, rather smashing cycling paths in Cambridge and a slog through the Friday night commute in the dark.

Zippy did fall off but I blame that to the 20kg of Snickers that he has in his back pack, it clearly unbalanced him. He was attempting a rather flamboyant 180 aerial manoeuvre that would have made Evil Knievel baulk and he hit the ground like a bag of hammers. Honestly, I could hardly breath as I laughed so hard, I think I may have soiled myself. My social work training is good for something, and I like to think my empathic response was evident as I checked his snicker supply for damage.
Anyway he was fine and he is a splendid companion and in no way am I annoyed at his endless enthusiasm.

Lots of thoughts about the state of the nation, time is something you have when you cycle and my mind is full.

So far I've a great title for a blog, no content, just a title without any content.
at November 27, 2015