At 3:10pm this afternoon my heart could almost burst with the recalled anticipation of the 10 year old me waiting for the last school bell of the year. How I feel now is more complex but I can still recall that giddy anticipation.
Our summer holidays are different now but I'll not bore you with our standard summer holiday shenanigans, japes and tom foolery other than the grand finale of last years summer holidays. When Mrs C, having being driven to the very edge of herself and beyond, grounded Flossy and Lotty for a whole year. 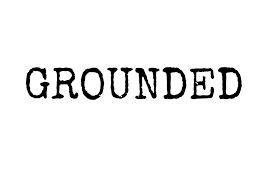 Mrs C is not a woman to be messed with and has on many occasions has left me open mouthed with her shear audacity in many contexts. On this day I was left breathless at the range and scope of the punishment she declared. In fairness it was the evening of the last day of the summer holidays so on reflection it was limited in its actual impact. Though quite a shock to the girls.

Realistically the terms of the grounding have become open to interpretation as we reach the 11th month of the term. Also, football has always been a 'protected activity' in Coates towers and is never subject to sanctions or threatened removal so that did not fall into the scope of grounding. Basically they were no longer allowed into the community alone, or together.

To protect the innocent I shall spare you the gritty details of the misdemeanour. However the long and the short of it being that it set in motion a chain of events that lead us to today, a week from moving home.