Flossy, champion of the World.

I keep a lot of our less than ideal 'stuff' out of the public gaze, a necessity as I've chosen to forgo my anonymity and therefore my children's. You can get the gist of what's going on and if you know me in the real world then you probably know all the gory details.
This year has probably been one of the hardest for Mrs C and Me.

So, the good bits.
Flossy loves football, I mean loves football.
Its a protective factor in our lives, the years of vulnerability and uncertainty in the playground have reduced as all she does is play football with anyone who'll play with her. And she's good. She holds her own with the boys and is as good if not better than many of them.
Flossy plays in a local team in the year above her age group, what she lacks in finesse she makes up for in focus, strength and speed. (I have no idea what that means). It's a fantastic nurturing, good humoured, gentle but committed team. It's almost enough to convert me to the game.

Football is a red line issue for us no matter what she goes if she wants to. Regardless of anything that happens before or after it will not be removed as a sanction or punishment it will not be used as a threat to moderate or control behaviour. Flossy loves football.
Through cold autumn, winter and spring nights we've gone to practices. I've stood in the cold and rain, I've sat in the car and written blogs and caught up with work. As many a parent knows footie practices can be hard miserable work. To boot there have been any times we've argued in the car before and after it's not pretty.

So, the best bits.
This season through hard work, a  strong defence and consistent goal scoring they won the league cup, a fantastic achievement, additionally they were in the trophy cup final.

The day came, we were all nervous and the weather was suitably grim.
Four hard quarters of play and I knew Flossy had hurt herself in the first quarter but wasn't letting on. The usual stuff, tension, thrills and excitement and worry but the whistle blew and the final score was 1:0, Flossy's team had won.

Parents cheered and moved onto the pitch towards the players who were tired letting the victory sink in. My walk turned brisker and I could feel my emotions rise as I quickened to a trot.
I was welling up as I finally broke from a trot to a run to a sprint. Flossy looked on slightly bewildered at me coming towards her.
In the rain you couldn't see me crying as I lifted her off her feet and span her around.

She'd been a part of something excellent, not a bystander or hanger on but right in the middle. Not a this or a that. Everything I knew about Flossy's short life raced through my mind and here she was the top goal scorer in the team that had won the trophy and league cups.

My Flossy, champion of the world. 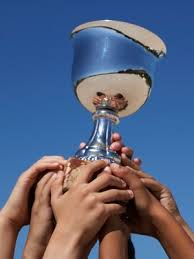