In most every way it's obvious, any group that has a significant life altering legislative and policy framework dedicated to them which has lifelong fundamental implications for them and their dependents and forebears should have some influence over it.

Well, apparently it's not so obvious.

We do get 'adoptee of the month' invited into roundtables or events, willing participants at Adoption Prep groups or the like and of course groups for young adoptees frequently given opportunities at events and conferences. All of that is welcome, but it's adoptees by permission, open to the accusation of being curated by adoptive parents or adoption agencies to ensure that they don't stray too far from the adoption orthodoxy. Or at worst young voices welcomed but given no permission or possibility to affect change or influence power. 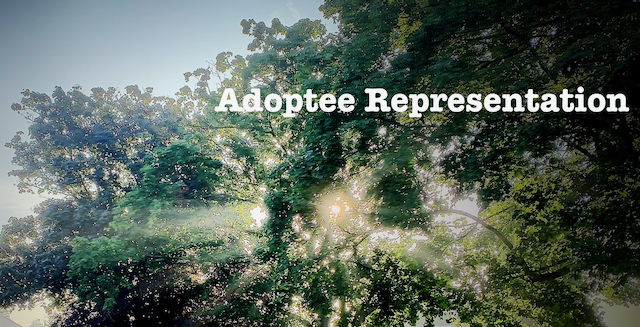 Of course any 'service user' consultation is challenging, fraught with diverse views and perspectives, disagreements and complications.

For example, what knowledge to adoptees have of the actual system? often too young or not privy to the forms, processes or paths that their adoptive parents travailed.

For example, if you were adopted in the 60's or 70's how relevant is your perspective on the Virtual School role for previous looked after children in high school?

Adopted adults views change and flex but that true of every human that ever lived.

All the above are reasonable points when considering adoptee input into the current system.

But it's all nonsense given my first paragraph, even if the role and influence is limited it's time for adoptees to come into the rooms where policy and practice are discussed.

We owe those that have found themselves cast into this system a voice in its running. Those that have passed through it need to be listened to, it may not be comfortable, it may not be pretty, but it may not be that hard and we may find areas where adult adoptees can improve and direct us to a better way of caring for children who can not and should not live with their biological families.

I say all this not as an adoptee but a witness to the adoptee experience and I'd argue that is valid enough but again I'm a palatable voice that may be too bland for some and too spiked for others.