There appears to be a determined and almost immovable halo around adoption.

Believe me I've tried to knock it off and I've tried to present my own lived adoption experience as relatively normal but I see the same enthusiastic determination in the eyes of prospective adopters that I had in mine. Aaaaaah, adoption.

In social circles eyes well up and hearts swell with sympathy at the revelation of my children's status as adopted.
Aaaw, look they're fighting. Aaaaaah, Adoption.

It rubs off on at least two sides of the adoption triangle.

So, regardless of my insisting, and Mrs C's confirmation, people refuse to believe that I'm generally a grumpy old git. How could I be, aaaaaaaah adoptive dad. Bloody halo.


I don't get asked to volunteer on adoption preparation courses. Now it might be because I talk too much but it might be because I might put them off. Don't be stupid, they've all been touched by the adoption Halo. You can almost see them think:
"It's all gone wrong for him, he must be doing something wrong. I've seen Annie, it's a doddle. Adoption always works out ok in the end"

Sometimes it's a pain, when we ask for consideration or understanding then the halo blinds people. In their minds they're thinking 'Those children have been there for years, they should be fine now. I've read Oliver Twist and he did ok'. In their eyes I'm just over an over fussing type. Aaaaaah, adoption.

If I was a cynic I'd suggest that politicians have worked this halo out.

Man on the street: 'Aaaaaah Adoption. Those nasty Social Workers.' 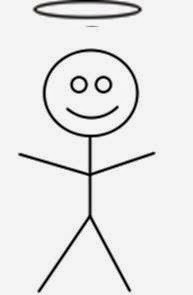 But I'm not complaining we managed to get money off our last family holiday because the salesman 'found out' we had six adopted children.