I will confess to feeling a warming of my heart as Flossy and Lotty ran together across the large play area. It was so nice to see them enjoying each others company as they united in a common goal. Casting aside usual differences they put their remarkable energy and willpower into a shared task that they both clearly felt passionate about.

I was not proud that they intended to rip the arms off a 4 year old boy and beat him to death with them. But it was lovely to see them not fighting each other and moreover sharing something. The little boy hadn’t realised what he was dealing with when he over zealously pushed a then 3 year old Lotty off a play slide, she’d sought out Flossy, 4, and formed an alliance to ‘resolve’ the issue.

Fortunately, I’d witnessed the whole event and having perceived their intended goal I managed to sprint across the room to save to poor unfortunate soul.
He’d sown the wind and was about to reap the whirlwind.

Though clouded in mystery and intrigue part of our motivation to adopt a sibling group was born from a desire to keep siblings together. We had this, perhaps romantic, view that that must be in the best interest of children.

Sarah, Gracie and Ginger were the embodiment of that. Throughout their child hood they were best mates. We rarely had any of their friends over, they just played nice for the 12 years the three of them lived in the house. The odd squabble and spat of course but no more than that.

Flossy and Lotty are a different matter. Enmity, jealousy and at a pleasure in the others misfortune is in their way. The reasons are multiple and complex. They share common biographies but differ in all the wrong, or right, places. 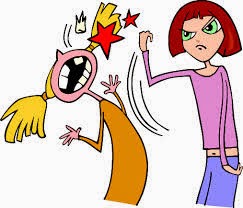 I’m not naive I know all siblings can fight, bicker, get jealous and fall out. But this is something different. Enmity was sown between them through contact experiences and is perpetuated by anxiety, fear, temperament, hurt, adrenaline and a raft of stuff. Sometimes one is the antagonist sometimes the other and sometimes both.
The rare times that they unite it is against Mrs C, one of the big ones or me.

They love each other I have no doubt but even that is a complex emotion.

Is it in their best interests that they were kept together? I can't and won't answer that but I'd be lying if on the worst days wondering what if.

When the regular headlines come out noting that X number of children in care are separated from siblings my heart cries ‘no’ and my head asks ‘perhaps there’s good reason’.
Once again dogma, romance and popularism have no place in adoption, rather case by case pragmatic decisions.